Center Grove Choirs, with their rich tradition of vocal and performance excellence, swept the Mixed and Women’s Divisions at the Norwell Show Choir Invitational Saturday. 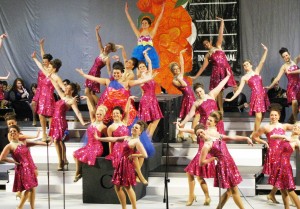 The Debtones continued their undefeated season earning another Grand Champion trophy in the Women’s Division. They also earned the caption awards for Best Vocal, Best Choreography and Best Stage Crew.  Abby Lord was recognized for the best solo in a show. Their show includes a wide variety of music styles from Gershwin’s Can’t Be Bothered Now, to Faure’s Les Berceaux and finally Americano by Lady Gaga.

Sound System also had a very successful day at Norwell.  They competed against 5 choirs in the finals to secure the Grand Champion trophy. They also earned the caption awards for Best Vocal, Best Choreography and Best Stage Crew. Sound System’s show is also quite diverse starting with Through the Looking Glass and concluding with Let Me Entertain You/Edge of Glory.  In the middle of the show the guys charm the audience with a humorous Everybody was Kung Fu Fighting!

CG Singers earned the First Runner Up trophy in the Concert Choir Division. This was the group’s final competition this season.  Their show ranges from the traditional Halleluiah from the Mount of Olives by Beethoven to a moving spiritual Soon’ah Will be Done by Dawson.